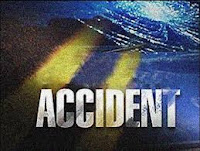 Two persons were killed and Three others critically injured due to a Car-Lorry collision occurred at Weligama Area in Galle-Matara main road(In Southern Province) this morning.

This accident was occurred during a traffic  congestion and the five persons who were inside the car at that time were identified as the victims of this accident.The injured including two small boys were admitted to the Matara General Hospital in critical condition.

The Police have arrested the 39 year Lorry Driver regarding  the accident.
- July 31, 2015 No comments: