President Maithripala Sirisena has today(01) signed and issued a 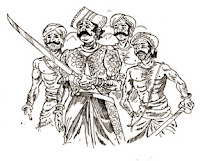 President signed and issued the gazette notification at a function held today in the temple of the sacred tooth relic in Kandy.

Kappetipola adikaram (Adigar)who led the Uva-Wellassa freedom Struggle in 1818 against the British rulers and received death sentence from Rulers and Pilimathalawe Adikaram who was deleted to Mauritius island were among  mong those declared as Patriots through the gazette notification .
- March 01, 2017