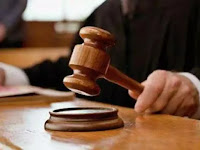 (07)sentenced four youths to death who found guilty over  killing of a person by attacking him from poles and sharp objects on 02 nd of December 2007 at Grand pass area.

Five Persons had been arrested by the police over killing of Steven chandran in 2007 athe Grand pass and  later remanded them.

Legal cases were filed against all of them and One of the suspects  had been released from all charges .Colombo High Court Judge Vikum KaluArachchi has delivered the verdict.
- May 07, 2019