Nearly 45,000 Persons In North Displaced Due To Floods 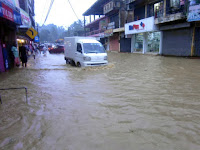 displaced due to floods  in Northern Province as a  result of heavy showers prevailing in according to reports.

Majority of the displaced persons are residents of Jaffna,Vavuniya ,Mannar and Mulathivu in KilinochchI District.

The security forces along with Officials attached to Disaster Management Center have launched joint search operation to rescue those trapped die to floods in the areas .

Meanwhile President has advised the authorities to take urgent steps to provide relief to displaced persons .A special meeting is scheduled to be taken place between President Sirisena and Government officers including Government Agents of Mulathivu and KilinochchI tomorrow  (24)to discuss the relief aid provided to the displaced persons in North.