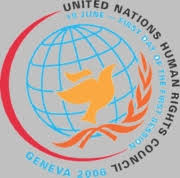 The US Sponsored resolution against Sri Lanka submitted to United Nations Human Rights Council(UNHRC)  in Geneva ,Switzerland was passed by majority of 12 votes this evening as 25 member countries were voted in favor of the resolution while 13 members voted against it.another 8 member countries including Japan were abstained from voting.