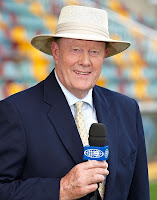 Late Tony Greig was a popular celebrity in Sri Lanka due to his love of Sri Lankan Cricket and he was   once appointed as the tourism ambassador to promote tourism in Sri Lanka.