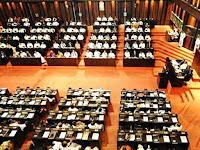 has decided to ban it's MP's from going abroad during the period 02 -06 th of April due to the no confidence motion submitted against Prime Minister Ranil Wikramasinghe scheduled to be taken up for debate in parliament  on 04 th of April.

All the United National Party MP's who are going abroad these days are being informed to be returned to Sri Lanka by 01st of April  ,UNP MP Ashu Marasinghe has stated.
- March 27, 2018