The special police task force personal have arrested an 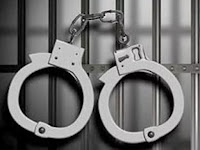 Egyptian National transported 66 Liquor bottles and Cans in a motor car without a valid license at Pothuvil area.

The suspect who was arrested with 18 Liquor bottles and 48 Liquor Cans had handed over to the Pothuvil Police it has been reported.He is due to be  produced before the Pothuvil Magistrate Court on Monday.
- July 29, 2017