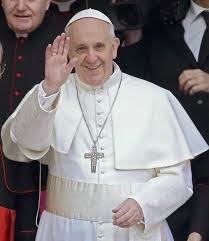 His holiness Pope Francis has began his six day tour to Asia from Sri Lanka today as he arrived Katunayake ,Bandaraniake International Air Port this morning.Pope Francis will be stayed in Sri Lanka till this Thursday(15) and he is due to attend a special mass at Galle Face Green on Tomorrow(14) morning and another special mass at Madhu Shrine.

A large crowd has seen in streets of Colombo to greet his holiness the Pope.This is the third time that a Pope visited Sri Lanka.

Pope Francis was greeted by Sri Lankan President Maithripala Sirisena on his arrival today and Pope is due to meet the President again this evening at President's House in Colombo.
- January 12, 2015